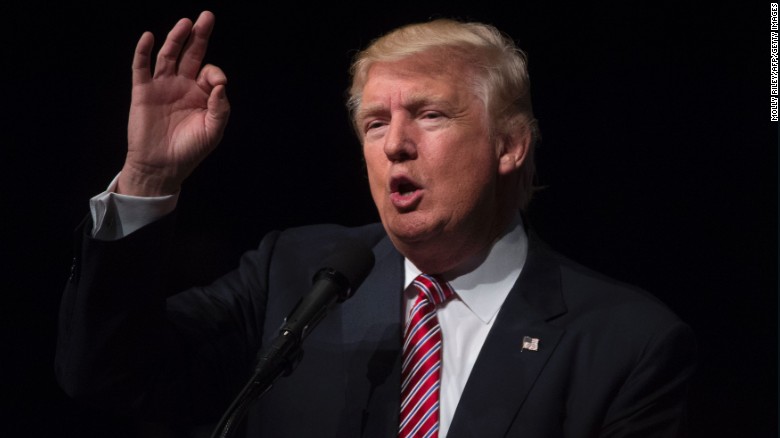 (CNN)Donald Trump has built a political brand on his willingness to say just about anything that comes to mind at a given moment — relying, he says, on his “gut.” Sometimes that means contradicting himself on fairly basic ideas and sentiments, like as recently as Tuesday about whether or not crying babies are fun to be around (Hint: less so over time).

The Republican nominee has no monopoly on broader policy reversals — though he has certainly adjusted his positions as much as anyone — but it is his remarkable agility to pivot in really tight spaces that continues to stun and frustrate opponents.
Here are a few things Trump has changed his mind about since becoming a presidential contender.

The entertainment value of NFL football

I don't know what it is, but I'm getting totally bored watching NFL football. Too many penalties and far too soft! T.V. off and back to work

But then…
“As usual, Hillary & the Dems are trying to rig the debates so 2 are up against major NFL games. Same as last time w/ Bernie. Unacceptable!” -July 29, 2016

As usual, Hillary & the Dems are trying to rig the debates so 2 are up against major NFL games. Same as last time w/ Bernie. Unacceptable!

His role ahead of the Republican National Convention

“It’s very important to put some showbiz into a convention, otherwise people are going to fall asleep” – April 17, 2016
But then…
“I didn’t produce our show — I just showed up for the final speech on Thursday.” –After the RNC

The utility of debt and whether he has any

“I have gotten to know him and he’s a terrific guy. I don’t know if he really comes out like he really is in person. He’s a warm, smart, tough cookie and that’s what this country needs. We need somebody that’s tough, that will stop China and OPEC and all these other nations from just ripping us up. And I think he can do it.” –Feb. 2012
But then…
“Mitt Romney had his chance to beat a failed president but he choked like a dog.” -Jun 11, 2016

Mitt Romney had his chance to beat a failed president but he choked like a dog. Now he calls me racist-but I am least racist person there is

Whether presidential nominees should release their tax returns:

On Romney’s returns: “I think in light of the fact that he started discussing some of the things, namely the rate or approximately the rate, I think it probably be better off just to release them now.” –Jan. 2012
But then…
On his own returns which he has refused to make public: “There’s nothing to learn from them.” –May 2016

“I think he is going to want to make New York great. … I think pretty strongly that he’ll end up being a good mayor, maybe a very good mayor.” –Oct. 2013
But then…
“N.Y.C. has the worst Mayor in the United States. I hate watching what is happening with the dirty streets, the homeless and crime! Disgrace.” -Dec. 7, 2015

N.Y.C. has the worst Mayor in the United States. I hate watching what is happening with the dirty streets, the homeless and crime! Disgrace

But then…
“Actually, I was only kidding, you can get the baby out of here. That’s alright. Don’t worry. I think she really believed me that I love having a baby crying while I’m speaking.” -Less than two minutes later, on Aug. 2, 2016.