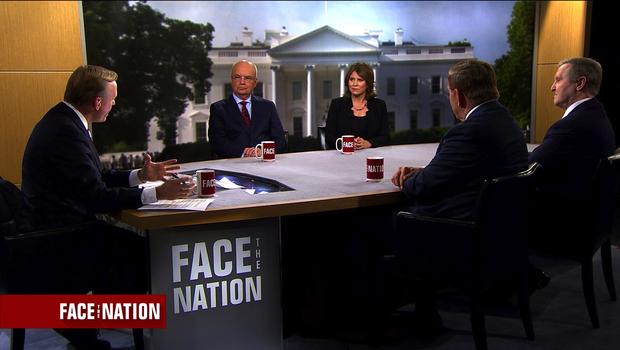 What kind of qualities make a good president?

There are many that are important, a group of former presidential staffers and advisers said Sunday on CBS’ “Face the Nation“–but the main ones include temperament, decision-making abilities, empathy and a willingness to take advice.

Former Utah Gov. Mike Leavitt, who headed Mitt Romney’s transition team in 2012, compared the president to “an air traffic controller with 500 planes in the air at any given moment, all of which think they’re about out of fuel or need to make an emergency landing.”

“There’s a lot happening, there’s a lot of voices and you need a person that has the temperament … the ability to operate in an orderly way, that has a history of making good decisions under fire and that can deal in an atmosphere where there’s going to be a lot of conflicting voices and people saying unpleasant things about him or her and responds in an appropriate fashion,” he said.

Also important in a president is his sense of “empathy” and “humanity,” said former Pennsylvania Gov. Tom Ridge.

“I remember what Jack Kemp used to say: ‘People don’t care what you know until they know that you care,'” said Ridge, also a former Homeland Security secretary. “And we need somebody that kind of projects that.”

Michael Hayden, the former director of the Central Intelligence Agency, said “integrity” is a quality that comes out in the moments that really test a president: when he or she is making a tough decision about a military operation.

“When you’re talking to the president about a covert [operation], it’s covert for a reason–because frankly, operationally, ethically, legally the course ahead isn’t all that clear,” Hayden said. “And so when I’m talking to a president about that, I’m representing all of the men and women at the Central Intelligence Agency. I want to know that I’m talking to a decent human being.”

Being able to admit you’re wrong, or be willing to accept advice from advisers, is another important attribute for a good president, said former Defense Secretary William Cohen.

One example, he said, was when former President Jimmy Carter had made a campaign pledge to pull 5,000 troops out of South Korea–a move Cohen and others thought, after meeting with officials in Korea, was unwise.

“We met with President Carter and said this could in fact trip a wire by you pulling those 5,000 troops out,” Cohen said. “To his credit, he listened to us and he changed. That was one example of being able to go to a president and say Mr. President, you’re making a mistake.”

That ability to listen to advice is important particularly for those with a business background like GOP nominee Donald Trump, Leavitt said, because there are always two sides of an issue in government.

“In business, you’re often able to make decisions based on your own intuition,” he said. “Whereas in government, there’s an old phrase: ‘No matter how thin the pancake, there’s always two sides.'”