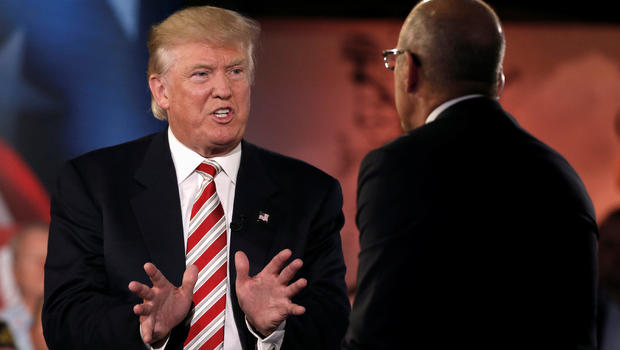 Tuesday night’s “Commander-in-Chief” forum on NBC was the first time Donald Trump and Hillary Clinton have appeared on the same stage for a candidate event—and it proved a difficult night for both of them.

Clinton, who took the stage first, faced a barrage of questions about her use of private email—including some from veterans themselves—and seemed irritated by the focus on that and her past actions with regard to the Iraq War and the intervention in Libya.

Trump, meanwhile, misrepresented his record on the Iraq War, disparaged U.S. generals, praised Russian President Vladimir Putin’s “great control” in his country and suggested his 2013 tweet about separating men and women in the military to prevent sexual assault was “correct.”

Both candidates were asked at the outset of their turn on stage—Clinton appeared first for 30 minutes, followed by Trump for 30 minutes—to refrain from attacking each other during their turn, a directive neither candidate fully followed.

During Clinton’s turn, her use of a private email server during her tenure at the State Department took up a significant portion of her half-hour on stage. Moderator Matt Lauer asked her whether people should question her “judgment” over it, about her use of her private email system while traveling overseas, and even specifics about her emails on the drone program.

“Classified material has a header that says ‘Top Secret,’ ‘Secret,’ ‘Confidential,’” Clinton said. “I will repeat this and this is verified in the report by the Department of Justice: none of the emails sent or received by me had such a header.”

Though Clinton has faced no shortage of questions about her email practices during her time as a candidate, they sounded even harsher coming from veterans themselves. One man, who dealt with sensitive information during his military service, told Clinton he would have been “imprisoned” if he’d mishandled classified information like she had—and Clinton’s response was to reiterate her explanation about documents being “marked classified.”

“Well, I appreciate your concern and also your experience, but let me try to make the distinctions that I think are important for me to answer your question,” she said.

“I did exactly what I should have done, and I take it very seriously,” she added. “Always have, always will.”

For Clinton, the next question was about her 2003 vote to authorize the Iraq War and her later comments that it was a “mistake”—followed by one from an audience member critical of her “hawkish” foreign policy.

“Let me say very clearly I view force as a last resort, not a first choice,” she said. “I will do everything in my power to make sure that our men and women in the military are fully prepared for any challenge they may have to face on our behalf.” Although Trump has maintained he consistently opposed the war, Clinton went on to point out that Trump expressed support for the war before it began and as it was ending.

Another tough moment for Clinton came during a question about the Iran nuclear deal, when she was asked whether Iran was “playing us” by agreeing to a nuclear deal it is unlikely to follow precisely.

“On the nuclear issue, no,” Clinton said, adding that if Iran does “cheat” on the nuclear deal it will be in other ways. “I would rather as president be dealing with Iran on all of those issues without having to worry as much about their racing for a nuclear weapons,” she said, citing ballistic missiles, Iran’s role in Syria, and others.

Overall Trump faced easier questions than Clinton did. Lauer and the veterans in the audience asked questions focused on his plans to combat ISIS, his stance toward Russia and his plan to fix the VA, for example.

In spite of this, Trump offered his signature lack of detail when answering questions that called for specificity—and he began the forum by falsely stating that he was “totally against the war in Iraq” from the start. (In his answer, he referred to a 2004 article in Esquire—and the Iraq War was launched in 2003.)

Asked about his previous assertion that he “know[s] more than the generals” about ISIS, Trump said the generals under the current administration are “embarrassing” for the United States.

“I think under the leadership of Barack and Hillary Clinton the generals have been reduced to rubble,” he said. If he’s elected, Trump said the country would probably have “different generals.” Those currently serving, he said, “have been reduced to a point where it’s embarrassing for our country.”

But asked to explain in more detail about his plans to defeat ISIS, Trump said he wouldn’t give specifics because he didn’t want “the enemy” to know what he was planning. “If I win I don’t want to broadcast to the enemy exactly what my plan is,” he said.

And on the topic of Putin, with whom some worry Trump would have a too-cozy relationship, the GOP nominee  did little to dispense with that notion. He praised Putin for having “great control over his country,” citing his high approval ratings in Russian public opinion polls. “When he calls me brilliant I’ll take the compliment, okay?” Trump said.

Further, in the Republican nominee’s mind, Putin’s leadership exceeds that of President Obama’s. “He’s been a leader, far more than our president has been a leader,” Trump said.

Another difficult moment from Trump came when Lauer asked Trump about his 2013 tweet that said, in response to the rise in military sexual assaults, “what did these geniuses expect when they put men & women together?”

In his answer Wednesday night, Trump maintained that he was right. “It is a correct tweet, there are many people that think this is absolutely correct,” he said. Sexual assault in the military “is happening and by the way since then it’s gotten worse,” Trump added, saying he believed more people should be prosecuted for sexual crimes in the military’s own court systems.

And finally, Trump—who has struggled to explain his position on immigration in recent weeks—told an audience member that he would consider citizenship for undocumented immigrants who planned to join the military. It was a completely new line for Trump, who has seemingly vacillated between suggesting all 11 million undocumented immigrants will be immediately deported when he takes office, and acknowledging that many of them could stay.

“I think that when you serve in the armed forces that’s a very special situation,” he said. “And I could see myself working that out, absolutely.”