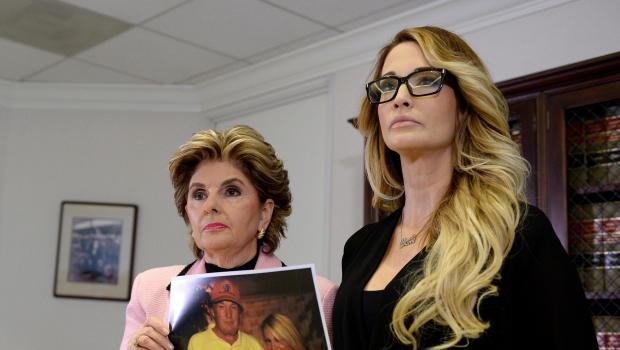 Donald Trump is dismissing claims by an adult actress that he acted inappropriately with her.

“Oh, I’m sure she’s never been grabbed before,” the GOP nominee for president said sarcastically during a Monday interview with WGIR, a New Hampshire radio station.

The actress, Jessica Drake, said during a press conference on Saturday that Trump had grabbed and kissed her “without asking permission” in 2006. She also said that Trump offered her money to come to his hotel room.

“Donald wanted me to come back upstairs to Donald’s suite,” Drake, who was joined by high-profile attorney Gloria Allred, said.

“I indicated that I did not wish to return. Then Donald called. He asked me to return to his suite and have dinner with him. He also invited me to a party. I declined. Donald then asked me, ‘What do you want? How much?’”

Drake alleged that she was later offered $10,000 and the use of Trump’s private jet in return for a visit to his room. “This is not acceptable behavior for anyone — much less a presidential candidate,” Drake said.

Trump, who has faced similar accusations from numerous women in recent weeks, insisted on Monday that the allegations are “made up” and “total fiction.”

Drake is the 11th woman to accuse Trump of sexual misconduct since the 2005 video of his lewd comments about women emerged, and she is the third woman to come forward who is represented by Allred, who is a Clinton supporter and was a delegate at the Democratic National Convention.