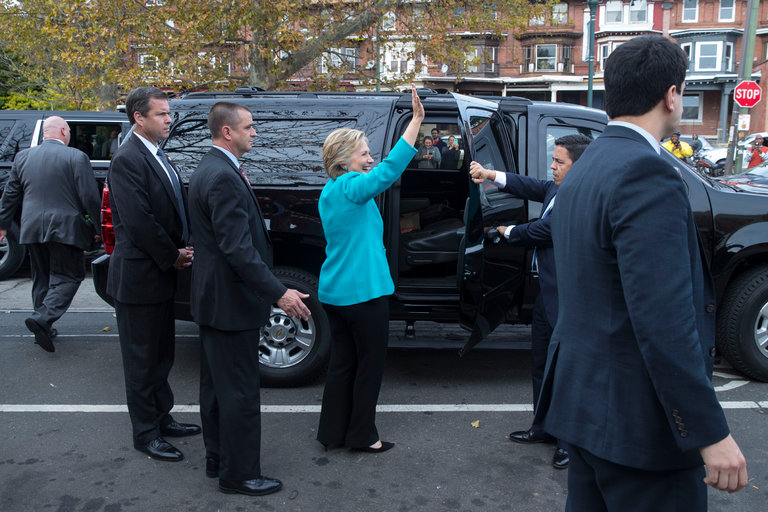 WASHINGTON — The F.B.I. director, James B. Comey, told Congress on Sunday that he had seen no evidence in a recently discovered trove of emails to change his conclusion that Hillary Clinton should face no charges over her handling of classified information.

Mr. Comey’s announcement, just two days before the election, was an effort to clear the cloud of suspicion he had publicly placed over her presidential campaign late last month when he alerted Congress that the F.B.I. would examine the emails.

“Based on our review, we have not changed our conclusions that we expressed in July with respect to Secretary Clinton,” Mr. Comey wrote in a letter to the leaders of several congressional committees. He said agents had reviewed all communications to and from Mrs. Clinton in the new trove from when she was secretary of state.

The letter was a dramatic final twist in a tumultuous nine days for both Mrs. Clinton and Mr. Comey, who drew widespread criticism for announcing that the F.B.I. had discovered new emails that might be relevant to its investigation of Mrs. Clinton, which ended in July with no charges. That criticism of Mr. Comey from both parties is likely to persist after the election.

While the new letter was clear as it related to Mrs. Clinton, Mr. Comey’s message was otherwise vague. He did not say that agents had completed their review of the emails, or that they were abandoning the matter in regard to her aides. But federal law enforcement officials said that they considered the review of emails related to Mrs. Clinton’s server complete, and that Mr. Comey’s letter was intended to convey that.

One senior law enforcement official said that as recently as Friday, it was not clear whether the review would be completed by Election Day. But after days of working in shifts around the clock, teams of counterintelligence agents and technology specialists at the bureau’s headquarters in Washington finished their examination of the thousands of emails. Officials had decided to make their decision public as soon as they had reached it, to avoid any suggestion that they were suppressing information.

According to the law enforcement official, many of the emails were personal messages or duplicates of ones that the bureau had previously examined during the original inquiry.

Brian Fallon, a spokesman for Mrs. Clinton, said in a post on Twitter that the campaign had always believed she would be cleared of any wrongdoing.

“We were always confident nothing would cause the July decision to be revisited,” Mr. Fallon said. “Now Director Comey has confirmed it.”

Kellyanne Conway, Donald J. Trump’s campaign manager, lamented the fact that Mr. Comey had again inserted himself into the election, but she predicted that his conclusion would have no effect on the outcome.

“The investigation has been mishandled from the beginning,” Ms. Conway said on MSNBC, arguing that Mrs. Clinton had wasted taxpayer money and federal resources because of her email practices. “She was reckless, she was careless, she was selfish.”

The new review began after agents discovered a cache of emails in early October in an unrelated investigation into the disgraced former congressman Anthony D. Weiner, the estranged husband of one of Mrs. Clinton’s closest aides. When searching Mr. Weiner’s laptop for evidence of whether he had exchanged illicit messages with a teenage girl, they discovered emails belonging to the aide, Huma Abedin.

That announcement renewed talk of an investigation that had shadowed Mrs. Clinton for much of the Democratic primary campaign. She and her aides had been under investigation for improperly storing classified information on Mrs. Clinton’s private email server. The discovery of new emails raised the prospect that the laptop might have new information that would renew the F.B.I. inquiry.

Federal law enforcement officials had said for the past week that only something astounding would change their conclusion that nobody should be charged. But the mere potential for legal trouble was enough to make Republicans gleeful, and Mr. Trump highlighted the F.B.I.’s actions in campaign ads.

At the end of a rocky week for Mrs. Clinton that included wild, false speculation about looming indictments and shocking discoveries in the emails, Mr. Comey’s letter swept away her largest and most immediate problem.

Republicans immediately accused Mr. Comey of making his announcement prematurely. “Comey must be under enormous political pressure to cave like this and announce something he can’t possibly know,” Newt Gingrich, a Trump adviser, wrote on Twitter.