A wave of vigilante killings – such as the bus passenger who shot four robbers – has struck a chord with Mexicans fed up with crime, corruption and impunity 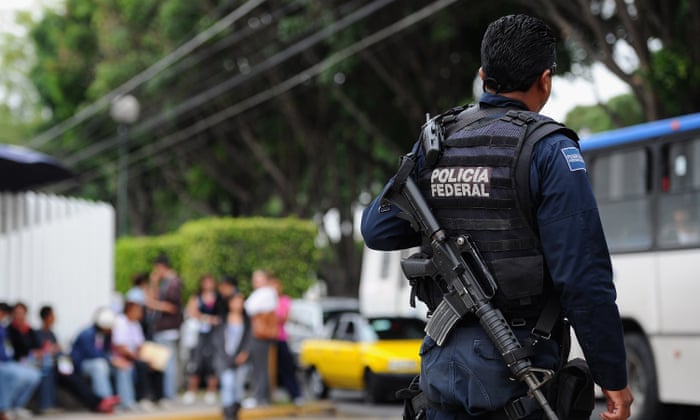 It was still dark when four men boarded the packed commuter bus heading for Mexico City and ordered the passengers to hand over their valuables.

They gathered up mobile phones and wallets, but as they prepared to leave near the town of Toluca, one passenger stood up, drew a pistol and shot the four assailants, killing their leader instantly.

The three injured robbers stumbled off the bus, but the gunman followed them out and shot them dead at the roadside. Then he returned to the bus, handed back the passengers’ belongings and disappeared into the darkness.

Police in Mexico state, which wraps round the country’s capital like a horseshoe, have deployed hundreds of officers in search of the so-called justiciero – or avenger.

But many Mexicans – fed up with crime, corruption and impunity – took to social media to praise the unidentified killer. None of the bus passengers have offered information to police, saying it was too dark to see him clearly.

The case is just the latest of a spate of vigilante killings in Mexico: in southern Tabasco state a taxi driver shot dead two assailants trying to rob him. In the western state of Guanajuato, a witness to the armed robbery of a seafood delivery driver followed and shot at the two suspects fleeing on a motorcycle, injuring one of them, according to local media.

Gema Santamaría, a sociologist at the Autonomous Technological Institute of Mexico, said that while the country has long been plagued by lynchings of supposed criminals, individual vigilante murders are a relatively new development.

“Public approval of the justiciero has to do with the deep discontent over how the justice system and security services work in Mexico,” she said

Santamaría said that surveys have shown about 46% of Mexicans approve of vigilante acts, while some 80% approve of “harsher punishments” to deter crime – “even if that means police abuse”.

One senator has even proposed loosening Mexico’s strict firearms laws to allow people to keep weapons in their cars and businesses.

An estimated 98% of crimes in Mexico go unpunished, while the most recent survey by the state statistics service INGEI found 93% of crimes are not even reported.

Some observers expect the “avenger” trend to continue, especially as stories of ordinary citizens meting out crude justice gain attention on social media.

“People have less patience and expect less from the government,” said Gerardo Priego Tapía, a former politician now directing an anti-kidnap group in Tabasco state. “This is prompting people to defend themselves and fight back.”