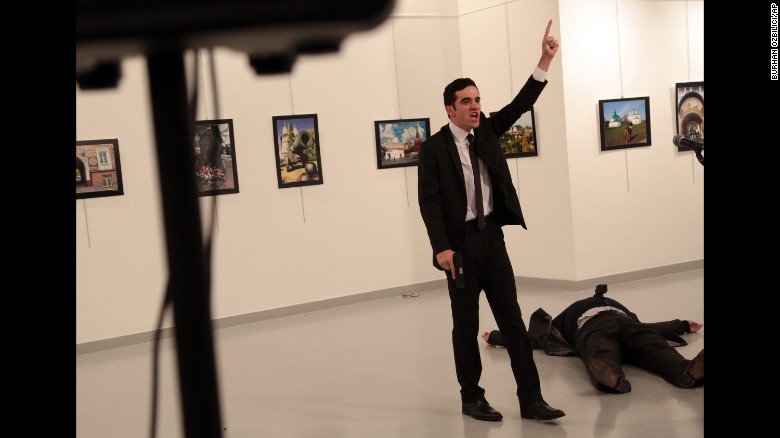 The ambassador, Andrey Karlov, was shot after he was about to deliver a speech on the opening of the exhibition “Russia in the eyes of Turks.”

Photos purportedly showing the perpetrator bearing a firearm are now increasingly circulating on social media. Users are also posting pictures which they say show the Russian ambassador lying on the ground after having been shot.

The perpetrator, who was wearing a suit and a tie, shouted ‘Allahu Akbar’ (‘God is great’ in Arabic) during the attack, AP reports, citing their own photographer.

The attacker also said several words in Russian, according to the news agency, and damaged several of the photos at the expo.

Turkish NTV broadcaster says that three other people were also injured in the attack on the ambassador.

The attacker has been killed by Turkish Special Forces, Turkish Anadolu news agency reports. Russian Interfax, citing a source in the Turkish military, also confirms that the gunman was neutralized.

Hurriyet newspaper, citing their own reporter, says that the perpetrator also fired warning shots in the air before targeting Karlov.

Pictures of the ambassador right before he was shot. pic.twitter.com/B5k8foVCjp

The attacker reportedly identified himself as a police officer as he entered the exhibition, a Turkish military source told Interfax.

“We have information, from one of the witnesses, that the attacker presented himself as a police officer, showing the relevant ID at the entrance. This information is being checked right now,” the source is quoted as saying.

Reacting to the assault on the Russian ambassador, the US State Department expressed its condemnation.

“We condemn this act of violence, whatever its source. Our thoughts and prayers are with the victims and their families,” State Department spokesperson John Kirby, wrote on his official Twitter account.

We condemn this act of violence, whatever its source. Our thoughts and prayers are with the victims and their families. (2 of 2)

A series of attacks

The shooting of the ambassador is the latest in a long string of attacks in Turkey this year, although it’s the first in recent memory to be directed at a foreign dignitary.
A car bomb exploded near a public bus in the central province of Kayserion Saturday, killing 13 soldiers and wounding 55 people, according to Turkish officials.
The attack came exactly a week after a pair of bombings in Istanbul killed 44 people, including 37 police officers, and injured 155 others. The explosions, which occurred after a heavily attended soccer game at Besiktas Vodafone Arena, were claimed by a Kurdish militant group called the Kurdish Freedom Hawks.

The attack comes at a time of improving relations between Turkey and Russia — relations that hit an all-time low after Turkish forces shot a Russian warplane out of the sky near the Syrian border in November 2015.
Russia had slapped a raft of sanctions on Turkey in the wake of the deadly jet incident, hurting Turkish exports and damaging its tourism industry.
But the relationship began to thaw in June, when Turkish President Recep Tayyip Erdogan wrote a letter expressing “regret” to the family of the pilot who was killed in the shootdown.
When Erdogan faced down an attempted military coup in July, Russian President Vladimir Putin was among the first world leaders to call and offer his support.
Erdogan and Putin have spoken several times on the phone in recent weeks as they worked to hammer out a deal to evacuate civilians from rebel-held eastern Aleppo in Syria.