Six people have been killed and at least 48 injured in a terror incident in London in which three male attackers were shot dead by police.
A white van hit pedestrians on London Bridge at about 22:00 BST on Saturday before three men got out and stabbed people in nearby Borough Market.
Police said the three men were wearing fake bomb vests.
One of those hurt is a police officer who was stabbed after going to help. His injuries are not life-threatening.
The Conservatives have suspended national general election campaigning and the prime minister will chair a meeting of the government’s Cobra emergency committee later.
Theresa May described Saturday night’s events as “dreadful”, while Labour leader Jeremy Corbyn called them “brutal and shocking”.
London Mayor Sadiq Khan said it was “a deliberate and cowardly attack on innocent Londoners”, but it remained the “safest global city” and Londoners would not be cowed by terrorism.
More than 80 medics were sent to the scene and the injured, some of them critical, are now being treated in five hospitals across the capital.

Metropolitan Police Assistant Commissioner Mark Rowley said it was currently believed there were only three attackers involved and the explosive vests they were wearing were “hoaxes”.
“We are treating this as a terrorist incident and a full investigation is already under way,” he added.
It is the third terror attack in the UK in three months following the car and knife attack in Westminster in March, which left five people dead, and the Manchester bombing less than two weeks ago, in which 22 people were killed.

‘Very aggressive’
BBC reporter Holly Jones, who was on the bridge at the time of the attack, said the van was “probably travelling at about 50 miles an hour”.
“He swerved right round me and then hit about five or six people. He hit about two people in front of me and then three behind,” Ms Jones told the BBC News Channel.
Another eyewitness, Robbie, was sitting in a taxi opposite the Barrowboy and Banker pub on London Bridge.
“I saw about 20 or 30 people rushing to get back into the pub and five seconds later a big white van came screeching down the pavement,” he told BBC Radio 5 live.
“Two or three people jumped out. Initially, I thought it was a road traffic incident and the people had jumped out to see if anyone was injured, but I could tell immediately, they looked very aggressive.”

His friend Josh was coming out of the pub a few seconds later and saw people running up to the bridge from Borough Market.
“A chap ran up and I heard him shout, ‘He’s got a knife, he’s stabbing people.'”
Another witness Gerard told the BBC: “They were running up shouting, ‘This is for Allah.’ They stabbed this girl maybe 10 times, 15 times. She was going, ‘Help me, help me.'”
Gerard said he chased the attackers, who were running into pubs and bars, and threw bottles, chairs and other items to try to stop them.
Gunshots were heard in the area while one social media user posted a photograph appearing to show one of the attackers lying on the ground outside a pub in the food market, with what police now say was a fake bomb vest strapped to his body.
A bomb disposal team was later called to Borough Market and local residents told to leave their homes. 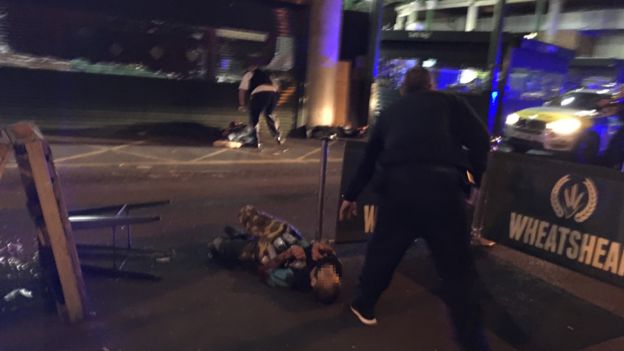 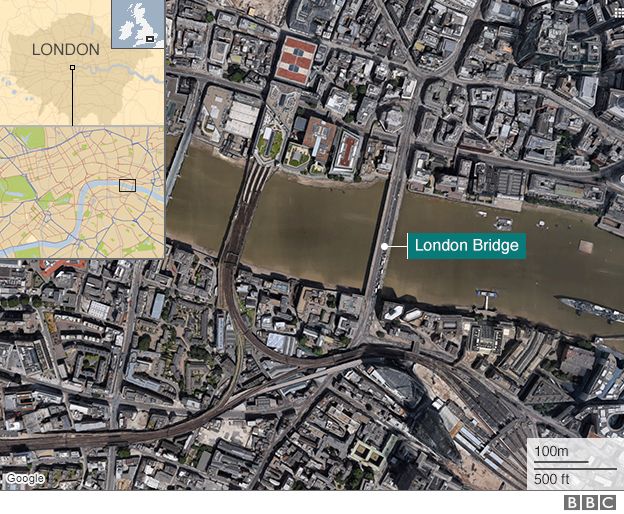 Eyewitness Will Orton was also in a pub close to the scene.
“We didn’t really know what was going on,” he said. “We thought maybe there was a fight or something outside. And then there were almost hundreds of people coming inside.
“The bouncers did a really good job, they shut the doors and locked everyone in. There was panic – it seemed like it was literally outside the door.”
Vilwar Hussein helped carry the injured police officer to nearby Guy’s hospital and recalled seeing a wound in his chest “and blood everywhere”.
Earlier, Vilwar said he saw the white van perform an illegal U-turn on London Bridge before driving back southwards along the pavement. 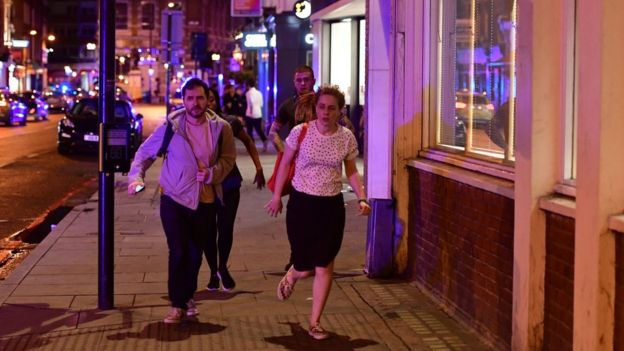 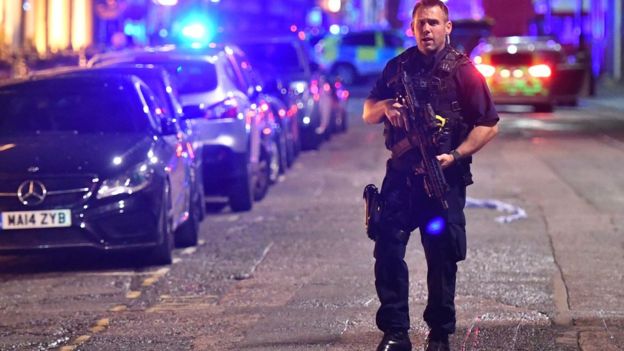 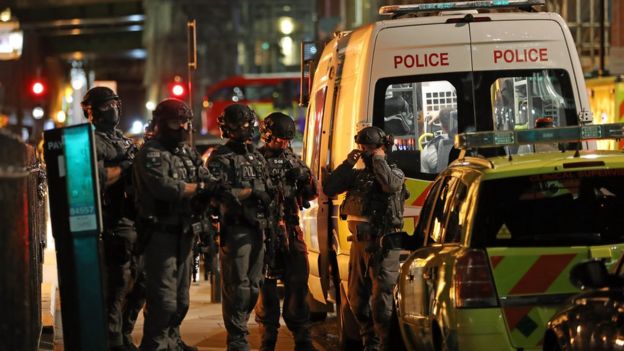 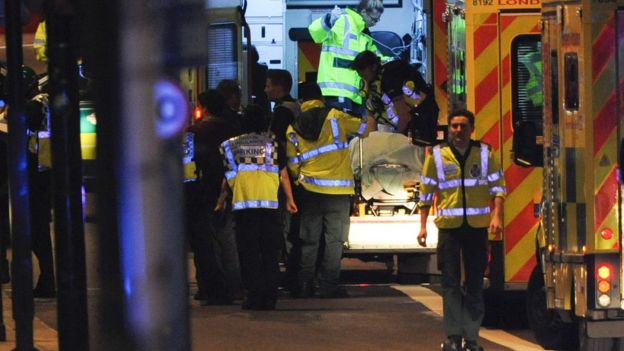 Transport for London (TfL) said London Bridge had been closed in both directions, while neighbouring Southwark Bridge has also been shut.
TfL said there were further closures in Borough High Street, while on the north side of the river, road closures included Lower Thames Street.
The Met Police has set up a casualty bureau on 0800 096 1233 and 020 7158 0197 for people concerned about friends or relatives who may be affected.
Facebook has activated its safety check so people in London could post a message to let friends and relatives know they were safe.
The police are asking anyone with photographs or videos of the incident to upload them here. 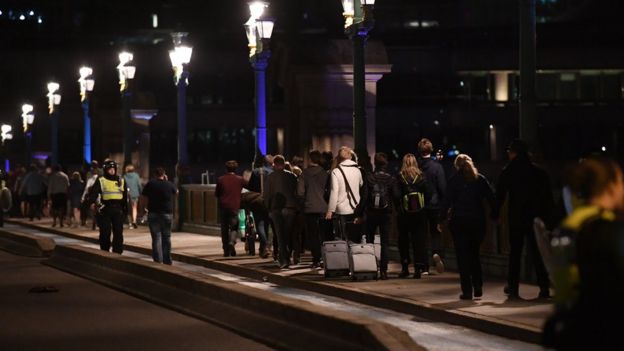 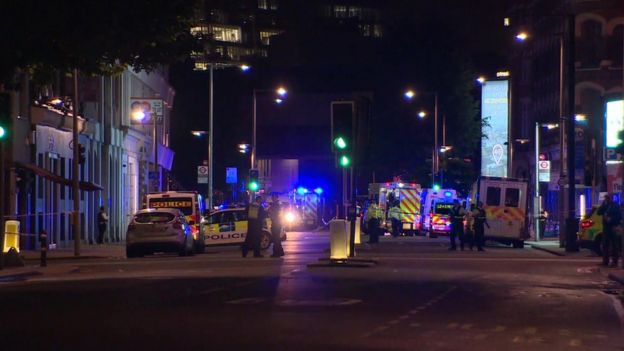