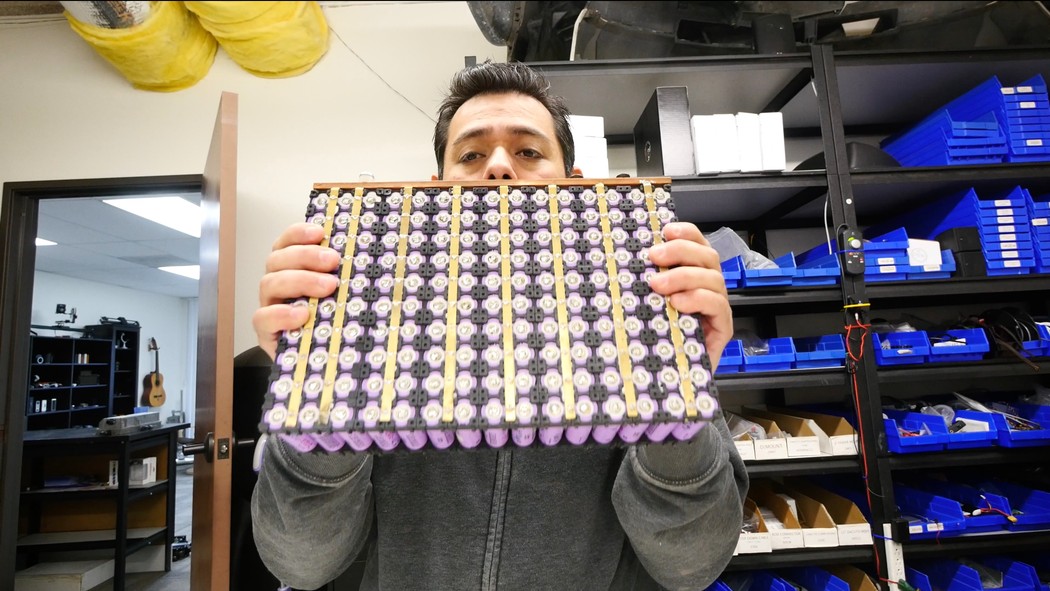 In May of 2015, Elon Musk unveiled Tesla’s Powerwall. The battery allows homeowners to store electricity, either from the grid or solar panels. The tech was alluring to those interested in alternative energy, but for many, the starting price of $3,000 was too steep. The battery could only store up to 10 kWh of electricity, or around a third of the amount the average American household consumes a day (the newer version can hold up to 14 kWh).

For some alternative energy enthusiasts, Musk’s deal wasn’t good enough. Instead of buying Tesla’s Powerwall, they build their own DIY versions using recycled batteries for a fraction of the cost. Then, naturally, they share their creations and swap knowledge with other hobbyists across the internet. DIY powerwall enthusiasts congregate on a dedicated forum, in Facebook groups, and on YouTube. They live all over the world: I spoke to makers on three different continents and a half dozen time zones.

“It’s the future. It’s clean, simple, efficient and powerful,” Jehu Garcia, one of the most popular powerwall builders, told me. He and people like him are deciding for themselves what the future of alternative energy will look like, instead of waiting for technology companies to shape it for them. “The end result is being able to rely on something I not only built myself but understand the ins and outs of to power some or all of my electricity in my home. That is inspiring,” Joe Williams, another powerwall builder, told me.

Almost all of the hobbyists I talked to built rigs capable of storing far more energy than the Powerwall Tesla makes. (A spokesperson for Tesla declined to comment.) A French Diypowerwalls.com forum member, who goes by Glubux, said his powerwall can store 28 kWh. “I run all the house with it, in fact I even bought an electric oven and induction cooking plate to use the extra energy during summer,” they explained.

Peter Matthews, an Australian YouTuber and one of the most central figures of the DIY powerwall scene, built a gigantic battery that can store 40 kWh of energy. It harvests power from over 40 solar panels on his roof. The system powers nearly his whole home: “The only things I don’t run are the big air conditioners and the water heating system,” he told me over Skype. Matthews created both DIYpowerwalls.com and the most popular powerwall Facebook group.

I also spoke to Daniel Römer, another YouTuber, who built one of the biggest DIY powerwalls I could find. His battery has over 22,500 cells, which he says can store more than 100 kWh—10 times as much energy as Tesla’s original Powerwall. The Swedish maker also uses it to harness energy from solar panels: “My system is built to be able to run my whole house 10 out of 12 months,” he told me in an email.

Many of the makers I spoke to said they were inspired by Garcia, who is likely the most popular battery hobbyist online. The California-based YouTuber has plans to build what could one day be one of the biggest privately owned sources of power in the US. The giant battery system will be able to store 1 megawatt of power—1000 kWh, he says. “We’re going to power a recycling facility,” he told me.

Most of the hobbyists I spoke with used 18650 lithium-ion batteries for their projects. They’re usually encased in colorful plastic coating and can be found inside electronics like laptops. One of the biggest challenges of building a powerwall is stockpiling the hundreds or thousands of 18650 cells needed to build a battery capable of storing a significant amount of power.

If you buy them off the shelf, they can cost more than $5 a piece, and rates on second-hand sites like eBay aren’t much better. At that price, you could end up paying more to build your own powerwall than just buying Tesla’s.

The powerwall makers I spoke to instead often relied on recycled batteries, which they get from old Dell, HP, Lenovo, and LG laptops (among other manufacturers). YouTube is full of videos explaining how to crack open an old laptop battery to harvest its cells.

People often just throw away old laptop batteries, Garcia said. “I thought that’s incredibly wasteful because everyone online is showing that you can harvest these cells and reuse them.”

He’s right. The old batteries he and other powerwall builders collect would likely end up in a landfill if they weren’t reused. “Approximately 95 percent of consumer batteries sold in the US are not recycled and are ultimately thrown away,” Carl E. Smith, the CEO and president of Call2Recycle, a leading battery recycling organization, told me in an email. “Virtually all batteries can be recycled into valuable secondary products which is the biggest reason why they should not be landfilled and should be recycled instead,” he said.

It’s often extremely time consuming to gather enough cells to build a powerwall. “In the early days I spent like 5 or 6 hours a week calling people,” Matthews, the Australian powerwall builder, told me. “I drove hundreds of kilometers each way to pick up batteries.”

Part of the problem is that not many laptops get recycled in the first place, Jason Linnell, the executive director of the National Center for Electronics Recycling told me on a phone call. He said that people may be simply storing their old laptops in their homes: “To be honest, laptops don’t come in in huge quantities right now for whatever reason,” he explained.

Garcia told me old laptop batteries can be so scarce that he’s seen their prices go up since people started building their own powerwalls. “The market was driven because so many people had interest in it,” he explained. “So it became really hard for me to get deals on these batteries.”

Another problem is that laptop manufacturers don’t provide old batteries directly to consumers. “I’m hoping we’re going to push these companies to be okay with using and reclaiming these batteries,” Garcia said. “It’s complicated with all the rules, the regulations, the lawyers.”

When I reached out to the laptop manufacturers, both Dell and HP discouraged hobbyists from reusing their batteries. “Dell laptop batteries are designed to be used within Dell-branded products only and we do not recommend or endorse any other use,” a spokesperson from Dell told Motherboard in an email.

“HP battery packs are designed for use in HP products and we don’t recommend their use in applications we have not designed and qualified them for,” a spokesperson from HP also said in an email. Lenovo declined to comment, and LG did not respond to a request for comment in time for publication.

Gathering enough batteries is only the first step to building a DIY powerwall. Every cell then has to be tested—not all are safe enough to be used, several hobbyists told me. Lithium-ion batteries have a limited lifespan: Some laptop batteries harvested end up having too little capacity to be used.

“You basically get the batteries, you crack them open, you test voltage to see where they’re at and then you cycle them,” Garcia said.

“Cycling” a battery means depleting its energy completely, then recharging it to capacity again. “These things are old…you kind of have to wake them up by cycling them,” he explained.

Once you have enough quality batteries, makers arrange the 18650 cells into holders or “packs.” Online suppliers offer pre-made battery holders, but many powerwall builders prefer to design and build their own. They’re often crafted so that if one cell goes bad, it can be replaced without having to take apart the entire rig.

Then, “busbars,” or strips of metal that can conduct electricity, are added to the top of the pack. Matthews, the powerwall builder in Australia used recycled copper in order to make his, for example. Once the busbars are added, the individual cells are then soldered together.

After enough battery packs are assembled, the completed powerwall is hooked up to an inverter and mounted to the inside of a shed or outside structure. Most hobbyists I spoke to said they don’t keep their powerwalls inside their homes for safety reasons or to comply with local regulations.

Don’t burn the house down

One of the most frequent topics that came up in my conversations with powerwall makers was safety. Fusing together hundreds of recycled lithium-ion batteries is dangerous, and could cause a fire if done incorrectly.

On the DIYpowerwalls forum, there are dozens of threads dedicated to preventing these massive, homemade electronic devices from catching ablaze. YouTube too is littered with videos warning powerwall builders that their projects are unsafe.

DIY powerwall makers often aren’t engineers or electricians. Most, including the most popular—like Jehu Garcia—lack formal training altogether. But they remain mostly unfazed by safety concerns, and said that more recently, makers have pushed each other to engineer more safeguards into their rigs. 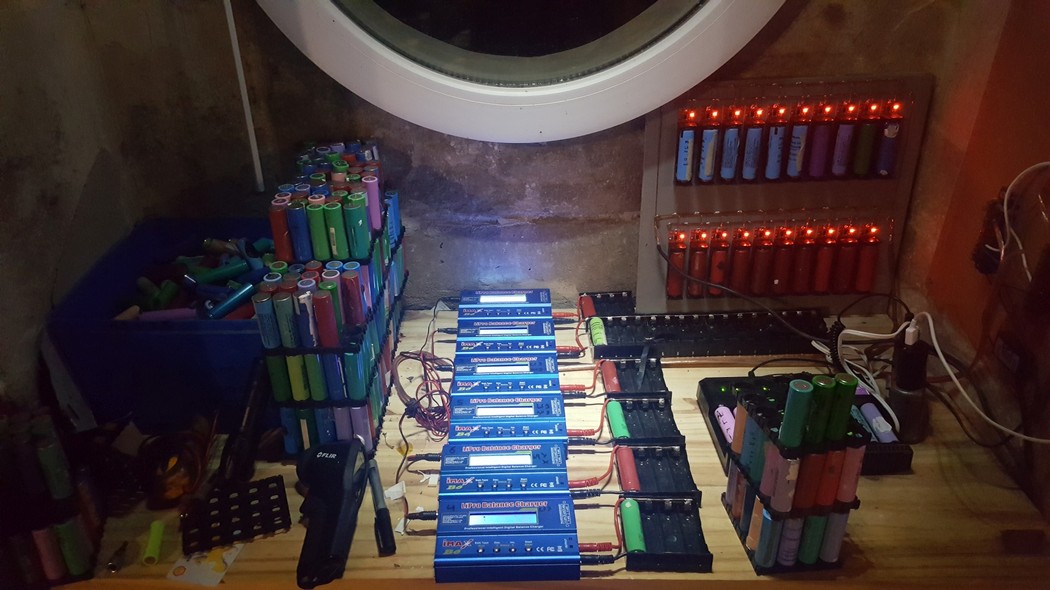 “There’s a lot of videos online where they say: ‘Let me show you how dangerous these batteries are,'” Garcia explained. “But what they’re doing is sawing them in half or pushing a ton of energy into them.”

There was “a lot of negativity in the beginning,” Williams said. “All of that ‘you’ll burn your house down’ type of stuff.”

Over time, and as well-made DIY powerwalls have proven to be capable of storing power safely, the community has become more positive. Recently, there’s been a push to adopt battery management systems (BMS), which can monitor a powerwall and notify its owner when it’s getting too hot, for example.

“I do recommend to have some kind of BMS or monitoring that automatically or partly can protect the cells from over and under charge including shorts,” Römer, the powerwall maker from Sweden, said. “I run Batrium BMS with special designed software that controls my 4 units including disconnecting the battery banks if something goes wrong.” 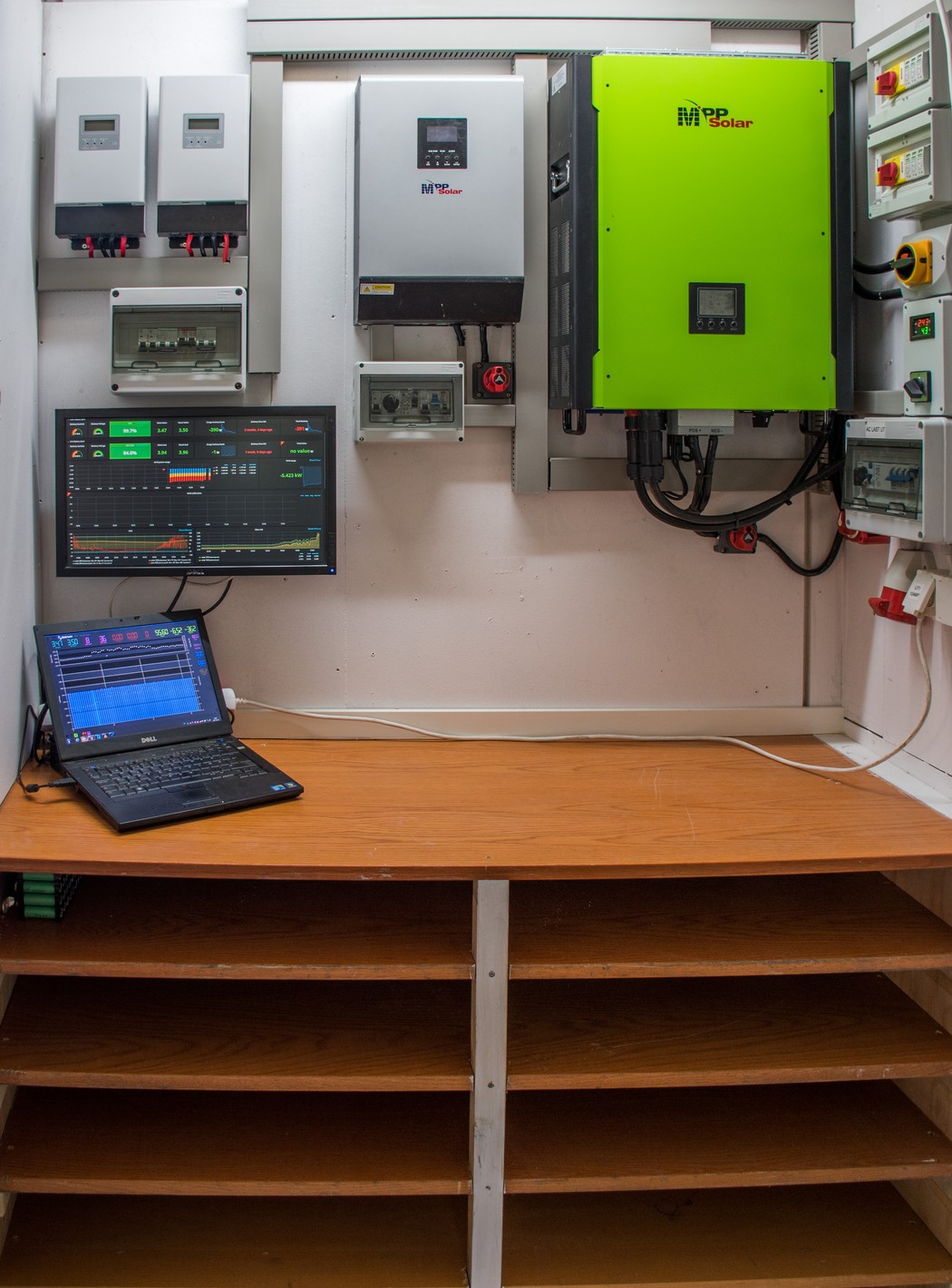 “I think the liability has grown. Someone is going to burn their house down if we don’t promote a good quality safety system for these batteries,” Garcia told me.

Every powerwall builder I talked to said developing their own source of alternative energy was worth the risks and significant resources involved. The payoff amounted to more than just dollars saved on utility bills—it’s given powerwall builders a community.

“I guess the most inspiring thing about building a Powerwall is all the different people from around the world getting together and figuring things out,” Williams said. 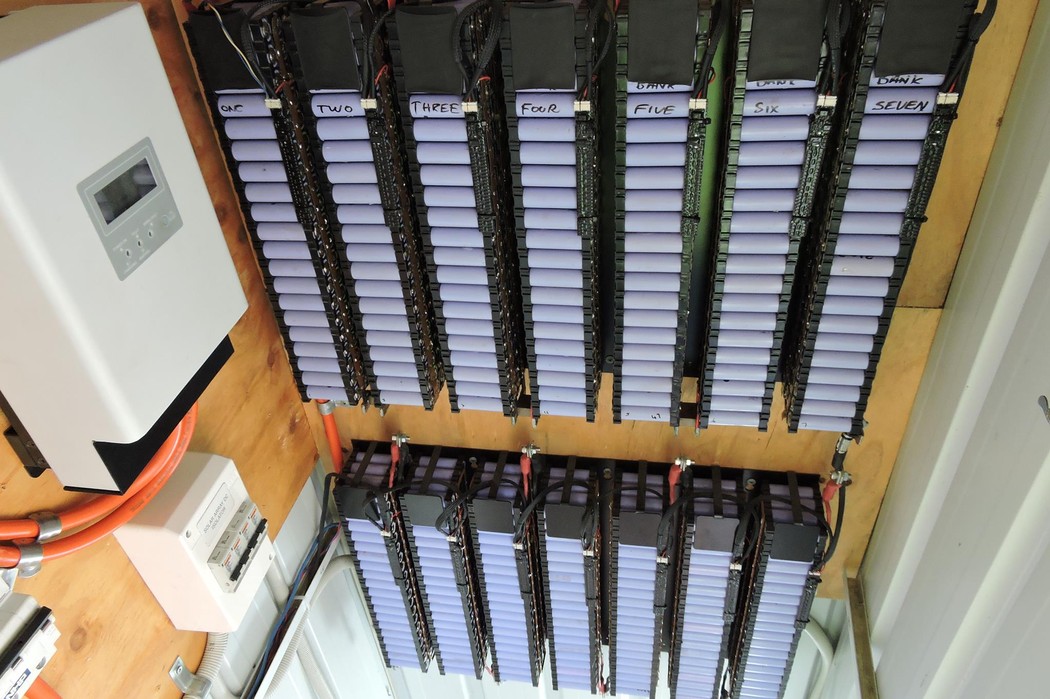